Project Tango, a Google research project aimed at making gadgets aware of 3D space, just announced the official Project Tango tablet development kit. The Project Tango tablet come with a 1080p display and runs a stock version of Android 4.4 KitKat, powered by NVIDIA’s Tegra K1 processor, a 7″ display (unknown type / resolution), 4GB of RAM, 128GB of storage, Tegra K1 quad-core processor, motion-tracking cameras, integrated depth sensing, and LTE. It comes with a front-facing camera has a 120-degree viewing angle, a 4MP rear camera with 2 micrometer pixels, a motion-tracking rear camera, and an integrated depth sensor, all powered by the NVIDIA Tegra K1 processor. The Project Tango tablet comes four months after Google announced the initial experimental smartphone with the functionality, it makes you wonder what Google has in mind when it integrates it to consumer hardware. Google intends to ship these out to developers later this year for $1,024, and a sign up page for the Project Tango tablet is currently live, to keep you up with notification and availability dates. 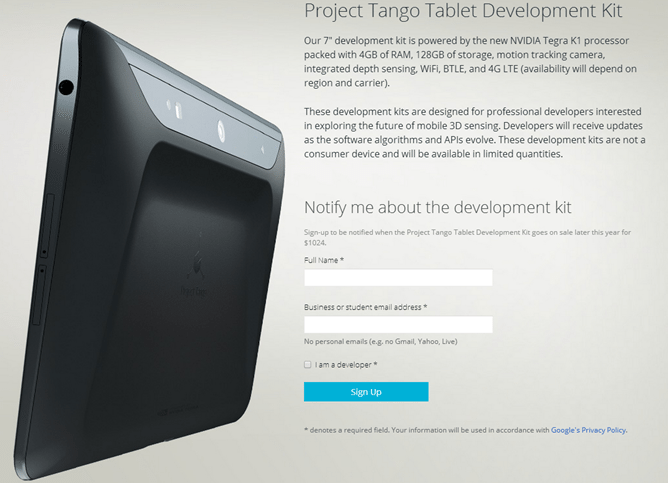 You can see the short video of the Project Tango tablet below.