This post has been sponsored by Pennzoil, but concerns our own opinion.

Car enthusiasts who take good care of their cars already know about  the Pennzoil new Platinum line of motor oil, mini ads couldn’t do the brand justice, that’s why they pushed a 6 short video documentary ‘Breaking Barriers’ about hot rodders who chase land speed records. The campaign showcases a team of experts set a new, unofficial record of 270 mph utilizing the fastest street legal car in the market, the Venom GT, using Pennzoil’s Platinum with PurePlus Technology line of synthetic motor oils. The Breaking Barriers series will give viewers a new appreciation for speed, with voiceover and on-camera appearances from country music star Tim McGraw. The documentary consists of 6 short videos that demonstrate the relentless process of ‘Breaking Barriers.’ 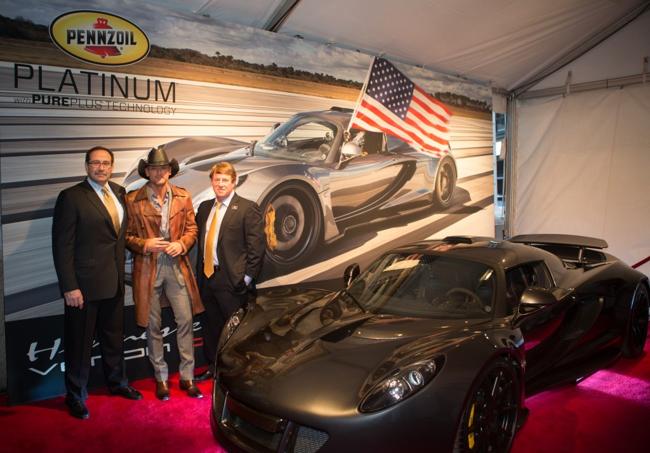 To bring the wonderful documentary to life, Pennzoil had to team up with renown figures in the auto industry (Alex Xydias and John Hennessey to name a few!) country star, Tim McGraw. The fastest street legal car, the Venom GT, (270 mph!) was used in setting the current speed record of 270.49 miles per hour. To tell this unconventional story of a brotherhood that chased their dreams, broke records and influenced the automotive industry in their tireless pursuit for innovation and speed, the documentary was produced by MediaCom and the Bandito Brothers. Tim McGraw perhaps says it best as he accurately pinpoints that ‘Cars, music and Pennzoil…they’re all part of the American life.’ Breaking Barriers will inspire and appeal to every speed chaser on the road, or anyone that shares this sense of passion and innovation. Check out the Pennzoil YouTube channel, Facebook, and Twitter for the latest in innovative auto technology news and products.

Breaking Barriers is brought to you by Pennzoil Platinum® and Pennzoil Ultra Platinum™ Full Synthetic motor oils with PurePlus Technology™, a revolutionary process that converts pure natural gas into a first of its kind synthetic base oil. When combined with a high performance additive package, you get motor oils designed for complete protection. Pennzoil® is committed to pushing the boundaries of motor oil technology and helping car enthusiasts break barriers.