Apple finally put the rumors to rest and finally unveiled its Apple Watch today. The Apple Watch comes with a host of cool features and Siri’s voice activated assistance is present too, giving you the usual Siri results like nearby movie theaters, restaurants and more. The Apple Watch comes in two different sizes 38mm (small) and one 42mm (large), with both offering the same features. The watch sports a  high-quality sapphire Retina display that serves as a touchscreen and can detect force, Apple said that the device can determine between a tap and a press. The watch packs four sensors on the back,  gyroscope, accelerometer, a heart rate sensor, Taptic Engine ,NFC, Apple Pay, and a choice of straps at launch. 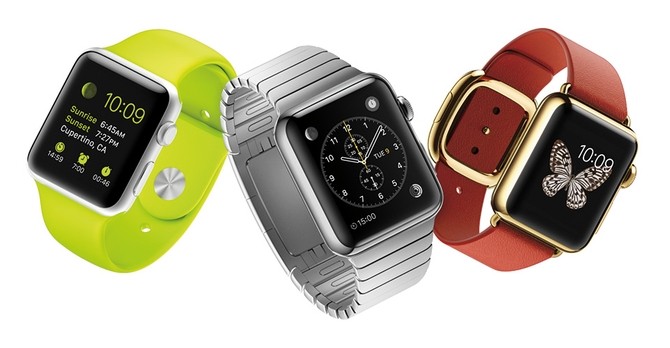 The watch comes with lots of UI tricks in form of little widgets of information, the most notable feature of the Apple Watch hardware is the “digital crown” — a dial on the right side of the device that you can spin and push like a button. The “digital crown” allows you to zoom in and out of the interface rather than pinching to zoom, it allows you to spin the crown to go in and out of the interface. There will be three variations f the Apple Watch, a stainless steel case and sapphire crystal display version, the Apple Watch Sport in an aluminum case with a selection of sportier straps, and the luxury Apple Watch Edition that comes in an 18-carat gold case and also features a sapphire display. The Apple Watch release is coming ‘early next year’, and it’s priced starting at $349.