For some reasons not known to man, LG has made so many underrated phones. Even when they push the limits with evolutionary devices like the LG V10, V20, and the modular G5 they don’t seem to garner the accolades they deserve. Let’s just say that the V30S flew under the radar too, but LG’s new device the LG G7 ThinQ is here with a ton of improvements that is enough to grab your attention with features like a more powerful AI camera, a super-loud speaker and the brightest display on a smartphone.

If you’ve noticed, this is the season of the notch, almost all the recently released smartphones have a notch of some sort. Yes, the G7 ThinQ has a notch too. It’s the little cutout at the top of the screen, housing the front-facing camera and earpiece. When it comes to looks, the G7 has softer edges like the LG V30, the back is slightly curved and the corners are rounded making it comfortable to hold. The front and back panels are made of glass Gorilla Glass 5 to be precise and metal rails run along the perimeter, giving it that premium feels when you hold it. The G7 is available in black, blue, gray, and rose, though availability depends on the carrier of your choosing. 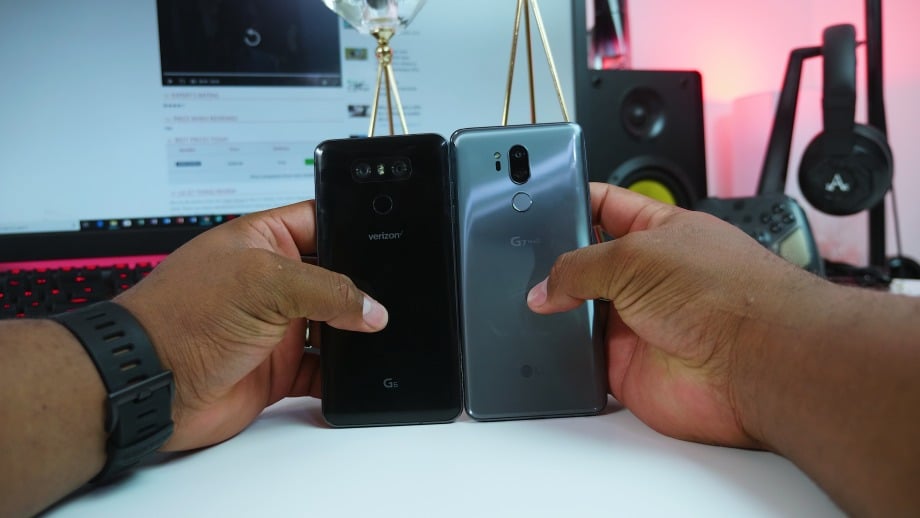 LG retained their design element for the G7 ThinQ with just a few prominent changes an LG fan would love or hate. One of the biggest design changes is the relocation of the power button. The traditional fingerprint sensor that doubled as a power button is no more, it now has a dedicated power button located on the right side of the device. All the ports on the device are located at the bottom, including a single speaker, USB Type-C port, and the highly appreciated 3.5mm headphone jack. The G7 is IP68 waterproof boasts a military standard 810G rating for durability. 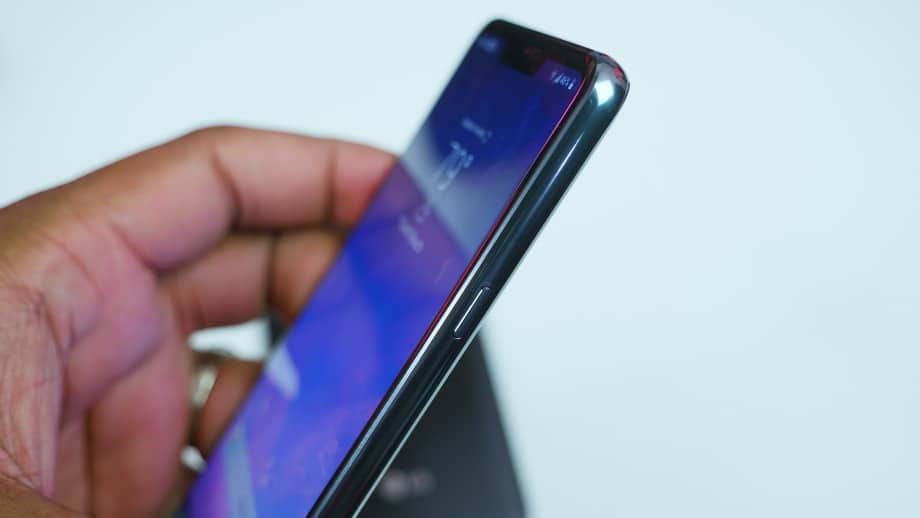 Another noticeable change is the G7’s new AI shortcut key. It’s located right below the volume buttons on the left side, and it’s used to summon the far more useful Google Assistant. Pressing the AI button launches the Google Assistant even when the phone is asleep, or you can hold the button down and let it go just like a walkie-talkie for the duration of your speech. You’ll just have to live with AI shortcut key because you can’t remap the button for now, maybe in the nearest feature with an OTA update.

As for the LG G7 ThinQ dimensions, the numbers ring in at 6.0 by 2.8 by 0.3 inches (HWD), it weighs in at 5.7 ounces making it easier to use in one hand. The LG G7 ThinQ is tall and narrow, it comes with a 19.5:9 aspect ratio screen, thin bezels, and a notch. Just as you’d expect the notch houses the earpiece, front-facing camera, proximity sensor and ambient light sensor it’s nothing like the barrage of sensors hiding behind the iPhone X notch. If you’re not a notch person, the software feature that allows you to camouflage the notch to look like a thin bezel. Lg didn’t stop at that as the notch can be customized with different colors and gradients. For those who like the notch, it’s worth noting that it does not interfere with content consumption of mobile gaming. The notch on the G7 ThinQ will automatically turn into a black bezel when you’re are using your device with the notch. 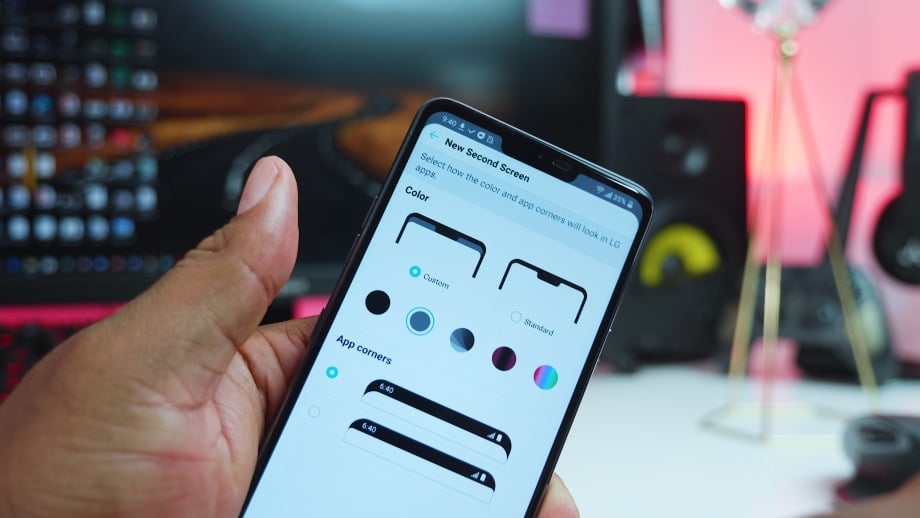 LG G7 ThinQ has an excellent display that’s vibrant for media consumption, it’s colorful and can be used outdoors even in direct sunlight, thanks to the brightness boost feature. The display on the G7 capable of going up to 1,000 nits in brightness because LG added a white subpixel to the standard RGB subpixel arrangement to boost brightness, cool right. LG decided to ditch the OLED display we saw in the V30, for what they call Super Bright Display which is just a 6.1-inch IPS LCD display with a crisp and sharp 3,120 x 1,440 resolution. The display has a variety of display modes you can choose from or you can tweak the display to your satisfaction through the display settings with RGB and color temperature sliders

Spec wise, The LG G7 ThinQ device we tested was rocking the latest Snapdragon 845 chipset clocked at 2.8GHz, 4GB of RAM, 64GB of internal storage and a microSD card slot that can accept up to 2TB cards. The speedy performance of the LG G7 can be attributed to the powerful Snapdragon 845. Gaming on this device, application launching, and entertainment consumption was totally lag free with excellent touch response, and fast /fluid animations. You can opt to get the 6GBRAM and 128GB of storage option.

The battery life is good, but don’t forget to take your charger with you if you’ll be on the road for a day. The 3000mAh battery will give you about 7 hours of intensive use or a full day of moderate use. If you need more juice out of your device, LG has baked in some power saving modes into the settings menu to help you identify and kill power-draining apps, as well as taper down screen brightness and background processes. If at any time of your use there’s a need to charge the device, the G7 ThinQ fast charging adapter can charge rapidly juice up the device via Qualcomm’s Quick Charge 4.0 or through wireless charging. 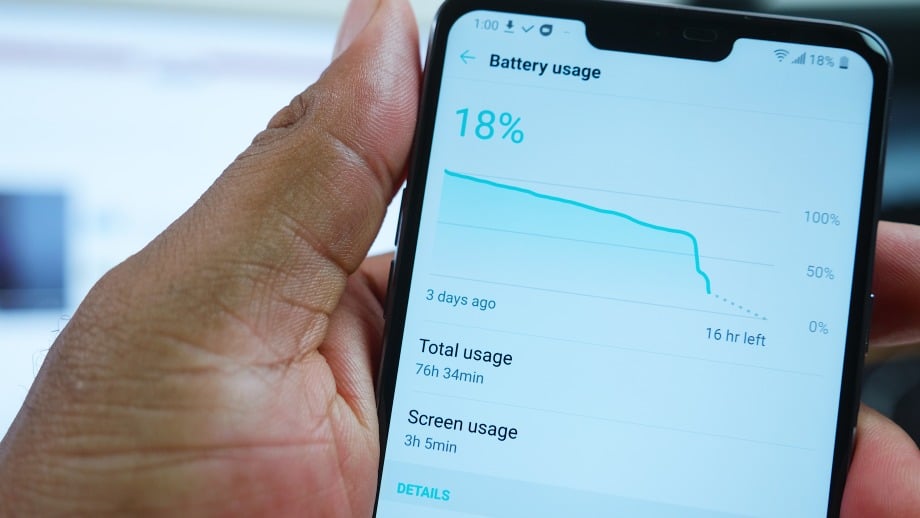 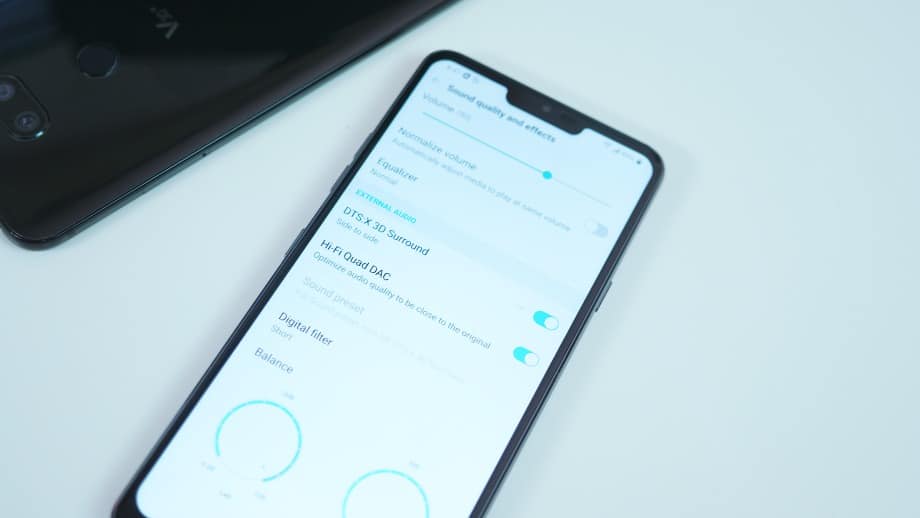 Despite having a mono speaker in the bottom edge of the device, the speaker features of the G7 comes with a significant audio improvement. The G7 has what LG calls the Boom Box Speaker, making it one of the loudest sounding mono speakers on a smartphone. The speaker on the device uses the space inside of the phone as a resonance chamber, thereby amplifying the quality and sound of the music when placed on a hard surface, it’s a nice party trick or it could come in handy when you want to listen to music on your device in absence of a Bluetooth speaker or headphone.

Finally, LG has upgraded its front-facing camera. The LG G7 ThinQ now has an 8MP front-facing camera, which is great for selfies. The extra resolution added to the front-facing camera makes a huge difference in the quality, details, and sharpness of the pictures taken. For the rear camera, the G7 ThinQ uses the same verticle dual-cam setup seen on previous LG devices, the usual standard, and a wide-angle lens combination. Both rear sensors have OIS and are 16 megapixels, meaning that users won’t be plagued with loss of resolution when switching sensors. The main sensor has a brighter f/1.6 aperture compared to the f/1.9 of the wide angle camera. It seems like LG has been listening to their user base, as the wide angle lens has been reduced to a 107-degree field-of-view to help eliminate barrel distortion on the edges of photos. For those of you interested on how the G7 fares with videos, the G7 tops out at 30fps in 4K, but you can record video in HDR. The Cine Video mode we saw on the V30 that lets you apply some filters to make your footage look more cinematic made it to the G7. 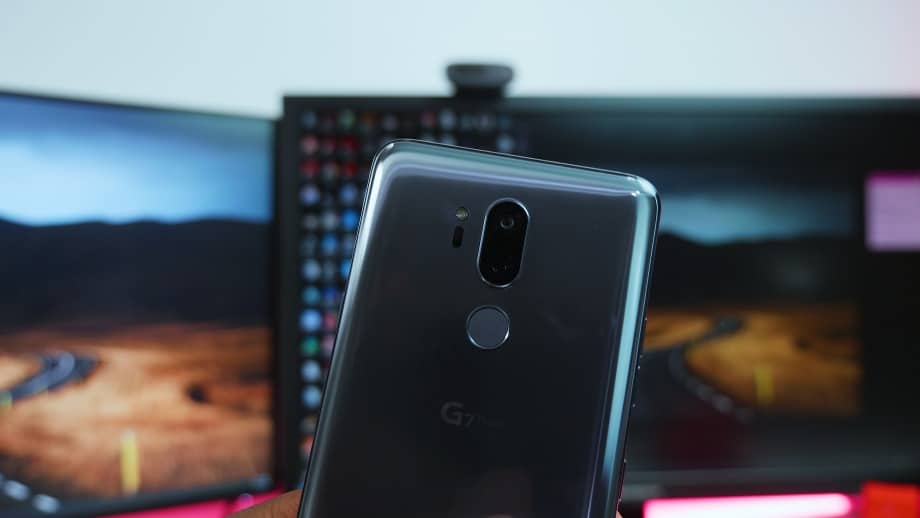 As usual, the LG camera is packed with a ton of manual and automatic features for any class of shooter, be it a professional mobile photographer or those who just want to point and shoot. You can say it basically has an identical camera features like the V30 with the exception of the Cine-log mode. The camera on the G7 is also capable of recording 240fps at 720p slo-mo videos. Both front and rear cameras have the portrait mode feature seen in recent flagship devices. The Portrait mode results on the rear camera are more consistent. The rear camera does a better job at separating complex subjects from the background.

Another interesting feature LG added to the G7 camera is the AI cam. The AI cam is capable of analyzing 19 different types of scene or subjects, and then it applies color filters, brightness and recommends the wide-angle camera or Super Bright Camera when appropriate. In order to access the AI cam on the G7 ThinQ, you’ll have to turn it on as it’s turned off by default. There’s no need to worry about internet connectivity when using the AI cam feature, all the image processing are done on-device.

There’s also Super Bright Camera mode that can be used to take pictures when the scene is too dark. This mode uses a technique called pixel binning to combine four pixels into one. The downside here is, photos taken with this mode are lower in resolution, you get a 4Mp photos rather than 16Mp. All the videos shot with the Super Bright Mode on will use the same pixel binning method, leaving you with a full HD quality rather than 4K in low light. Without the Super Bright mode on, the cameras still do a good job at maintaining plenty of details, color, and it keeps noise to a minimum.

Overall, the image and video quality of the G7 is good. The main camera produces images with pleasant colors and crisp details, while the upgrade to the front-facing camera was a much-needed upgrade.

For people coming from an older LG device, you’ll just feel at home. LG G7 ThinQ runs Android 8.0 Oreo out of the box on top of its heavily customized UI. LG decided to play it safe by using Google’s own Assistant instead of creating its own voice-activated assistant to compete with Siri, Alexa or Bixby.

The G7 comes with a few pre-loaded apps including LG Health, a file manager, LG’s own music and gallery apps, Smart cleaning – for optimizing memory use, LG Mobile Switch and SmartThinQ; LG’s app for controlling your ThinQ-compatible appliances. By default, the launcher does not have an app drawer, you can enable the traditional Android app drawer button or use a swipe up gesture option. Just like its predecessors, LG’s theme engine allows for further customization with additional wallpapers, icon packs, UI themes, and always-on display clocks. 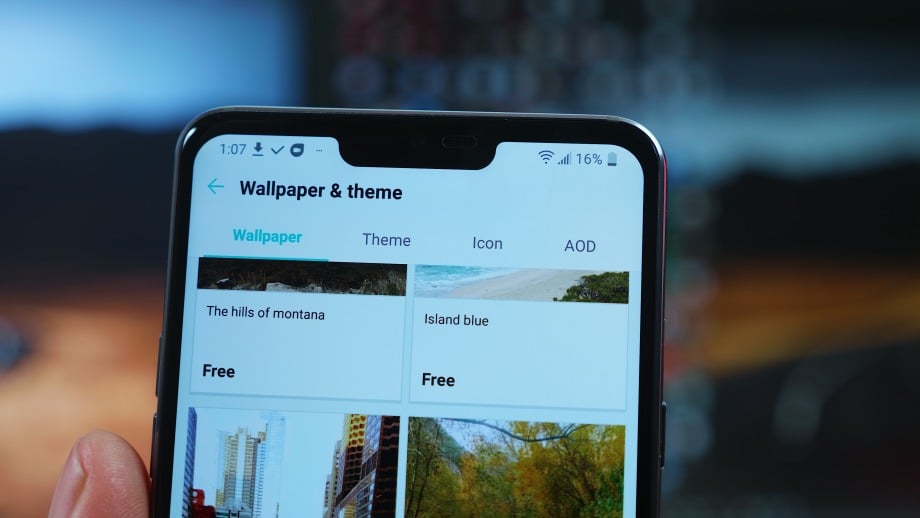 Overall, the LG G7 ThinQ is a good phone. It comes with a very bright screen, it’s water-resistant, comes wireless charging, it has a surprisingly good sounding mono speaker and it still has a headphone jack. The G7 ThinQ can be listed as another fantastic device from LG. Despite its tall screen, the phone can still be used one-handed. Spec wise, the LG G7 Thinq can go toe-to-toe with any flagship device launched this year.

The LG G7 ThinQ is available on all U.S carriers with their specific deals or promotion, see the source link below for more.